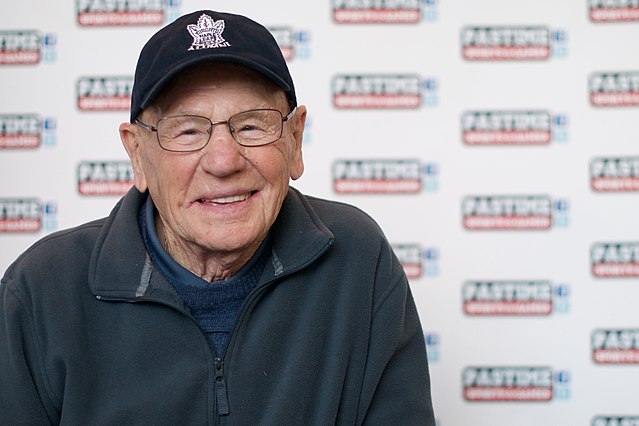 When I was a kid, I played “3 and you’re in”, every day after school, until my mother would come home from work. Whoever was in net or in reality in front of, one of the garage doors in my apartment complex, pretended to be Johnny Bower. There was no crouching like a Jacques Plante or rolling around like the Gumper. No, a garage door required a stand up goalie with a quick glove hand, and the ability to poke check the ball away when any attacking forward decided to get fancy.

Johnny Bower lived three doors from my high school, where he handed out autographed photos to kids that were bold enough to knock on his door during the off seasons. Apparently they eventually named the street after him.

In his later years, if you lived in the west end of Mississauga, you would see Johnny shopping or showing up at a NHL signing event in the local malls. He was a regular at my wife’s store and one Christmas she asked if when he could sign a book about the Leafs that she was sending her father in Nova Scotia. Johnny said, he would come in the next day if she brought it in. He wrote a full page letter to her father inside the book.

I saw Johnny for the last time, about a week before he died. He was 93. He came charging through the Dollar Store followed by one of his kids or grandkids, I presume. I was in line at the cash and turned to a millennial texting behind me. Do you know who Johnny Bower is?, I asked.Yeah the kid said, I’m texting my dad right now.


PS here is Johnny’s single that knocked the Beatles out of No.1 spot on the Chum Charts for three weeks in 1965.