Finally the NDP know their place 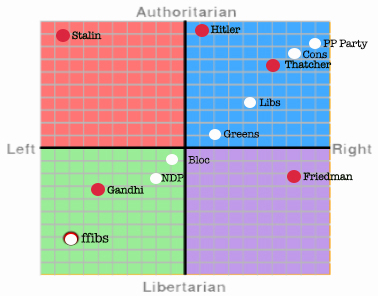 This weekend Jagmeet Singh has come out again, reinforcing his promise that the NDP will not support a Conservative minority government.

Great news for the stalwart dippers who believe the libs and reformers are the same and the disaffected libs who are pissed at which ever broken promise upsets them the most.

Now if you live in a purple riding like the GTA, where the NDP grab any stranger off the street to wear orange for a couple of months, you can more comfortably vote red or if you live in a riding where they take their orange more seriously you can safely vote Orange.

As for the Greens, my sources tell me that they are planning a takeover of our most western island, which makes sense as it is the location with the most huggable trees in North America.

Under the continuing FPTP electoral system this is about as good as it can get.

We've been through this before when Ignanatieff decided to visit his homeland and rebuke the olive branch being offered by the other opposition parties, after Harper, in contempt of parliament, prorogued his minority government to avoid loosing a confidence vote.

The result of which was a near decade of darkness ruled by the oily blue meanies.

So with caution, I suggest that the dippers do us all a favour and keep Cullen away from the cameras and hold a liberal minority government to one simple concession for their votes.

End the FPTP in the first year.

As for my personal political compass I'm still sitting to the left and south of Gandhi.

The Mound of Sound said…
Jesus, Willy, I've got you beat. I'm a tad less authoritarian and a smidge to the left. Must be hugging all those gorgeous trees out here on the island. Coming from Vancouver I know that 10 or 15 years on the island can really change a person. A lot of us just want to be left alone and don't care much if the authorities double the ferry charges. Every bit of newcomer deterrent helps, especially those Wild Rose yahoos.
October 16, 2019 at 11:46 AM