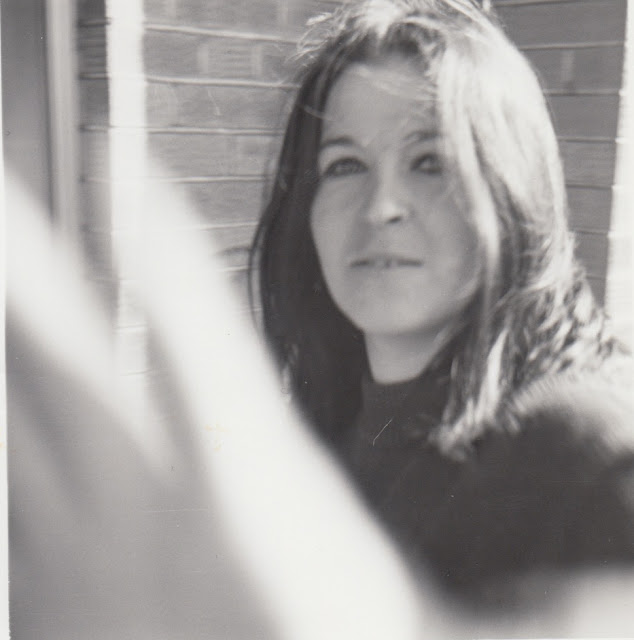 We were married for 45 years and forty one days. The first time we met you were wearing a very short Nova Scotia plaid skirt and climbing up and down a rolling stockroom ladder, moving cases of Arid deodorant cans from a skid to a stockroom shelf. Having time to kill and being junior management I offered my assistance and stood at the bottom of the ladder and started handing you the cases and watching you climb up and down the ladder. After three or four cases you stood at the top of the ladder, turned and said "My name is Janis and I think you've helped yourself enough here. thank you very much.".

It took three months before you moved in with me. I thought you were brave or maybe overly trusting, being a country girl from Nova Scotia and moving into a small two room apartment on Hunter Street with a doper from Toronto, but hey we were both strangers in Hamilton, a city neither one of us grew up in. The only people we knew were the other employees of the store and most of them were older and married. We were together all the time. We bought a black bean bag chair, a piece of purple outside all weather carpeting that we cut into an oval, a mattress to sleep on and a kitchen table with chairs at a fire sale down the street. Oh and we got a black cat that kept pissing in the bean bag.

You smoked some weed and started your lifetime affection for wine and didn't freak out when I did acid every now and then on my days off. We found a packaged condom once on the steps to the apartment building and it was the first one both of us had ever seen, We decided it wasn't something we were going to use again. We figured out you were pregnant by late August or maybe September and it was awesome. By today's standards we were the worst parents to be that there ever was. I still cringe when I remember you sliding with you arms and your legs spread wide, down the icy parking lot of the Hamilton City hall, with a huge belly holding our future son and five glasses of wine, laughing and telling me, you better catch me. Yeah we didn't know what we were doing.

We both had vacation saved and were planning a trip together, until of course I blew it and told you what the Vice President that flew in from Montreal to meet with me had said. They had heard that you were pregnant and had found me a position in Ottawa, with a raise even. I could be there in a week and no one would have to know where I went. After all I was a an assistant manager and girls from the Maritimes were known to move in with men who had a good future and trap them into marriage.

Ignoring the fact that I had answered "Why would I do that, I'm going to be a dad", you got pissed and took off back to the Maritimes. Of course I then got mad and headed out west to visit some friends who were still living the life in Banff. It was a long week and they weren't that happy to let me sleep on the floor of their cabin. Then one night in a bar where I was hitting on some American girl that was on a pre-college spree I got drunk and kept talking about you. She gave me a kiss and said "You should go back and marry her, man" and I got a plane out of Calgary by the weekend.

Of course you weren't back yet and I wasn't a hundred percent sure that you would return, but i decided to make a deposit on ring and tell our friends that we were getting married. The fact that I hadn't asked you yet seemed to bother them more than it did me. I had a lot of confidence back then or was just lucky, because you did return and that first night back on our mattress I asked you to marry me. You asked why and I replied because I put money down on a ring. You asked me to describe it and how much did it cost. I never did tell you the price although you admitted many years later that you found the deposit receipt in my wallet one day and went and checked it out before I finally paid for it. I guess that night though, you must of liked the design because you said yes and we were married with two friends as witnesses on the first weekend I had off, on a snowy Saturday, December 5, 1970, forty seven years ago today.

This is the same story I told you after three weeks in the ICU following your brain surgery, when you finally admitted that you didn't know who I was.

I also told it at your wake because back then It was the only time I could vividly remember. You died on January 15, 2016, two hundred and sixty nine days after you were diagnosed with leukemia, the bad kind, which they told me that first night, when you went to the bathroom. At best you had a year they said, but it wasn't something you wanted to know and something I did not want to tell.

You were going to beat this thing, with the same attitude you had about most of the shit we had to deal with over the years and you jumped right into the chemo treatments. Five weeks at Princess Margaret, two weeks of back and forth between home and the blood lab downtown. We were pumped and then the brain tumor hit and it robbed us of some time. We were together for two hundred and sixty eight of those days and the day off is on you babe because you hounded me to take one.

There are days, in fact even multiple days in a week that I don't think about you and I don't even feel guilty about it anymore. Today though is not one of those days.

The Mound of Sound said…

That was almost as tough to read as it was beautiful. It sounds like you both knew what you had in each other. Thanks for posting that.