Yeah I'll join in on this one. Who is this man? 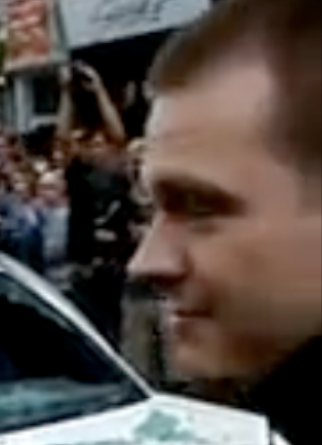 Watch the video again, he is either the politest anarchist I've ever seen, stepping back when the tall dude in the white shirt asks him to stop tipping the car over or a cop that was told not to get into any provocations with the citizenry. I mean it wouldn't look good to assault a citizen that was trying to actually uphold the law.

Besides the guy's jeans look brand new and check out the other guy with the scarf and Walmart hat on backwards that stepped in to help him try to turn over the car. He also poliely stepped back when asked to by the tall dude, in fact too far back. Not even a fuck you.

The part that bothers me most about this video, is the asshole's grin. not the grin of someone who thinks they have stuck it to the man, but a grin that reeks of hey I fooled you hippie protestors.

If you know who he is, call crime stoppers or better yet let the rest of know.
Labels: Harpers Canada

Anonymous said…
This guy looks like an undercover RCMP officer I met a few years ago in Montreal. Seriously --he looks like him. There is NO way this guy is an 'anarchist' --brand new jeans and backpack -- this guy is a cop!!!

Time to out these people!! How did he know exactly where the siren was in the car and how to use the mike so well .....he wasn't angry enough to be jumping on the car --it was like a kid jumping on the bed not an angry anti-establishment guy. This is so staged. Time to out all of them and toss the head which is Harpo -- he is destroying everything this country stands for. Treason!!
June 30, 2010 at 11:46 PM

Unfortunately he looks like every RCMP officer I have met, at least the ones without a moustache.

I was sort of hoping that someone would come forth and say "Oh that's my neighbor Dwayne Smithy, the cop from down the street. He borrowed my 6" spanner and never returned it. He's an asshole in the neighborhood too"

You may be correct, the undercover provaceurs would most likely be from out of province.
July 1, 2010 at 8:04 AM