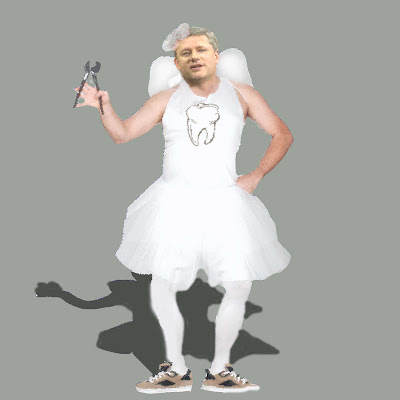 With his strengthened mandate in hand, our prime minister has announced his new six point plan to deal with “this period of economic uncertainty”.


Now I know that some of you might be concerned that Steve’s plan might be missing some, well you know, details, but don’t worry he’s going to issue a fiscal update before the end of November.

As for supporting the our financial institutions, Steve will take "whatever appropriate steps are necessary" and here’s the good part, it will not involve "significant outlays of taxpayers' money."

Whew! Everything is going to be okay now.

It's just like having the tooth fairy for a dad.

Update: I apologize if this post seems a bit too sardonically, facetious (I'm trying to learn big words)  but I think I have to get it out of my system.
Labels: Weird stuff from around the world

Beijing York said…
No apologies necessary as far as
I'm concerned. The cuts to departmental spending was something Harper was planning to do all along. An economic crisis just gives his minority the justification for dismantling more public services.

tdwebste said…
Unfortunately we are seeing the market oscillations Asian has been seeing since the spring. Asian was hit very hard early one because of the massive amount of US dept purchased to compensate for the massive trade deficient and fixed exchange rate.

We are now just seeing the effects bounce around the world. This is not over it is just beginning. Last week was not the crash. The crash will occur when the US cannot borrow money to pay its interest, the moment demand for US T Bills falls.

tdwebste said…
The republican belive that deficients don't matter is what got us into this mess.

As reminder of Harper's illresponsibility leading to this crisses.

Harper followed Bush's example and first deregulated credit. June 2006, than again in November 2006 CMHC relaxed its standards. Prior to Harper, government insured mortgage were a prudent maximum of 25 years and with a minimum down payment of 5%. The introduction of dangerous zero down 40yr mortgages fuelled already out of control housing prices. Canada is not suffering to the extend the US people are suffering because the Liberals know there is piper to pay and did not follow Bush deregulating credit. Only after Canada felt the growing credit crises did Harper reverse the dangerous zero down 40yr mortgages effective Oct 15 2008 which he earlier introduced in 2006.

Earlier this year, CMHC was the first Canadian mortgage insurer to introduce, on a pilot basis, insurance on loans with extended amortization periods of up to 30 years.
October 15, 2008 at 10:52 PM