Harper wants us to go down with his ship

The Tories released their quickly assembled party platform at 2:30 this afternoon.

They are promising $345 in tariff relief to small manufacturing, $200 million to aerospace and another $200 million to the evaporating auto industry. Forestry gets promised $20 million. Oh and he changed his mind on eliminating the film and TV tax credits.

There that should fix things.

Well not quite as the TSE started to gradually climb in anticipation of Harper’s grand announcement, it quickly resumed it’s decrease as soon as he started talking. 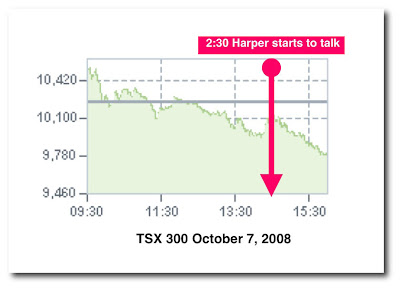 As a wise old stock trader once told me, the market always knows. The TSX crashed through 10,000 ending the day at 9,780.

It was probably this line that did it for them.

“As the saying goes”, Harper said, “it wasn't raining when Noah built the ark. Which is why when the rain came, Noah didn't need to panic and he didn't switch boats."

Sorry Steve, Noah was a fictional character and no one wants to sail around in a boat full of shit.
Labels: Harpers Canada