Harper is all sweater, no cattle and riding a one trick neocon pony to economic irrelevance 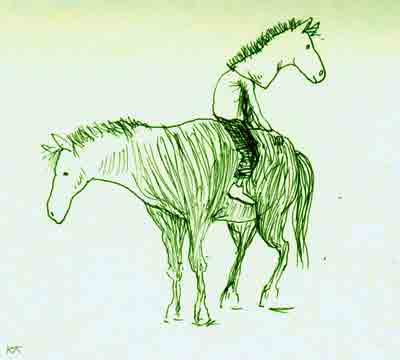 Obviously this should is a very positive opportunity for Canada.

One Canadian dollar is worth about two thirds of a Euro making our resources, our agricultural produce, our specialized technological manufacturing, our creative services (printing, design, advertising, animation and film, etc,) and our overall labour costs more appealing to a large expanding European market.

After 8 year of the Bush insanity, the US has deteriorated morally, economically and now financially and our dependence on the US as our largest trading partner (some might say only trading partner) risks to pull the Canadian economy into a the US led free fall and stall our own growth for the next decade.

As the US was becoming less relevant on the world stage, the European Union successfully created a powerful common market that is now starting to expand it’s worldwide economic influence.

They accomplished this somewhat amazing feat by regulating the independent national markets, imposing rules of how the various countries within the union manage their economy and do business with each other.

More then half the laws in any European country are now EU laws; there's a near-total harmonization of standards, measures, government activities; there's complete freedom of movement, allowing companies to do business in any other member country as if it were their own.

If the mayor of Lisbon wants to buy some new city buses and a company in Slovakia has the right stuff, then he has to treat it as if it was a Portuguese company. If a Polish plumber wants to set up shop in Bologna, the Italians have to give him a license and recognize his qualifications.

The Europeans are now looking to expand outside of their common borders, approaching other developed nations such as Japan and are even willing to approach Canada.

This is the purpose of the meeting next week.

Unfortunately many Europeans believe that there is something very dysfunctional about Canada that makes it hard to fit into the wider world and the economic ideology of our current prime minister creates an even wider abyss.

The problem with Canada is that it's not really one place. You think you're talking to Canada, and you make a deal, and then it turns out that someone else, in one of the provinces, has gone the other way. There's no unity.

Most alarming to the Europeans is that Mr. Harper does not appear to be moving Canada toward a Europe-friendly harmonization.

Quite the contrary, he has spent his time in government promoting something he calls "open federalism," an approach he once likened to Belgium, a country that has just about collapsed under the weight of disunity.

Today, he uses the term to suggest a shift of power to the provinces, and a removal of national standards in, say, labour laws or job training or medical care or housing standards.

Harper embraces the same neoconservative free enterprise, mantra that has destroyed the US.

Deregulation of national standards that allow large corporations to set their own rules.

In Harper’s Canada as in the US, corporations wield unfettered influence over localized political states.

The largest examples in Canada being the oil industry’s influence in Alberta, the impending agri-corp take over of the Wheat Board in the prairies and even the now recessive influence of the auto makers on Ontario’s rules and regulations.

Although Harper’s main objective has been the permanent removal of national regulation of our oil based resources, his open federalism sales pitch and refusal to take on a role of national leadership, has exasperated the dysfunctional disconnect right across the country.

Although Canadians have experienced the effects of Harper’s deregulation first hand with the deregulation of food inspection allowing the Listeria out break, the Europeans believe his neoconservative ideology is most evident in his total abandonment of environmental action to curb greenhouse gasses.

The most significant manifestation of open federalism has been on carbon-emissions policy - an area that European leaders take extremely seriously.

They see Canada as having an impossible hodgepodge of approaches: Quebec has a carbon-trading system, British Columbia a carbon tax; several provinces are trying to reach an agreement with several U.S. states on carbon taxes; some provinces, such as Alberta, have little more than a policy of increasing pollution.

Or as the Globe and Mail writers summed up their version of this story.

During the past two years and eight months of Mr. Harper's reign, a period when Europe was breaking its collective back trying to find a way to make its member countries more united and harmonized, Canada was moving in the opposite direction.

The world has just witnessed an 8 year experiment of neoconservative economical governance that has brought the most influential and powerful economy to it’s knees.

Although the Americans are finally voting these corporate pirates out of office it will take a decade before the damage is undone. A decade where other markets such as the European Union will continue to become more powerful and influential.

Harper just doesn't know any other way and he is proving it every day.
Labels: Harpers Canada