Can you play God Bless America on a banjo 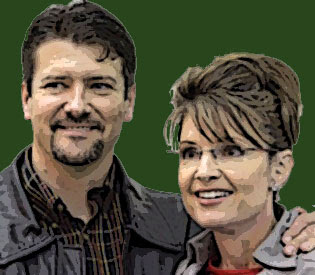 The Alaska legislature, ethics committee, report that investigated Sarah Palin’s abuse of power, during her beverly hillbilly like tenure as Governor of Alaska found that her husband Todd, the self described “first dude of Alaska” was in there running things, sort of like a "two for".

Todd Palin spent about 50 per cent of his time in the governor's office, making phone calls, participating in meetings or just hanging out.

We're having it (a meeting Todd called with officials) in the governor's office, and he's not the governor. I think he was trying to use state trappings to handle a personal issue.

He had a significant influence, in that he was always interacting with the employees there,

Any time I needed to get information to the governor, I would always go through Todd.

The governor and her staff kept Todd Palin in the loop on a wide range of issues, copying him on e-mails about union matters, public relations and a bill requiring parental consent for abortions

Just think, if McCain actually won the US election, Todd would be one heartbeat away from being the first dude of America.

At three in the morning who will answer the phone, Todd?
Labels: US politics