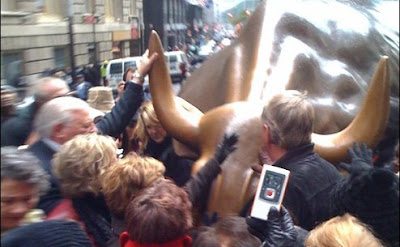 Yesterday, unbelievably, crazy Christians, gathered around and laid their hands upon the The Wall Street Bull to pray for God to turn the stock markets around.

Apparently the 700 Club declared October 28th a Day of Prayer for the World’s Economies and asked followers to go pray at the statue of the bull.

We are going to intercede at the site of the statue of the bull on Wall Street to ask God to begin a shift from the bull and bear markets to what we feel will be the 'Lion’s Market,' or God’s control over the economic systems, she said.

And sure enough these crazy, horribly confused people showed up.

I am not a Christian, but aren’t there some rules against worshiping at the foot of an idol.


More pictures and video from Wonkette here.
Labels: Weird stuff from around the world